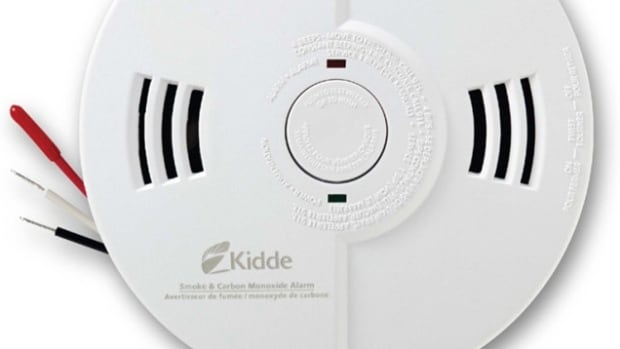 The recall applies to two Kidde NightHawk models that are hard-wired into a home's electricity. (Health Canada)

(Note: CBC does not endorse and is not responsible for the content of external links.)
A national recall has been issued for 1.5 million Kidde smoke detector and carbon monoxide alarms in Canada because they may not chirp in the case of an emergency.
The recall applies to two Kidde NightHawk models that are hard-wired into a home's electricity and were manufactured between June 2004 and March 2011. The affected models are:
The issue is the alarm may no longer chirp in the model with battery backup even after the original batteries have been replaced. In the case of the model without battery backup, the chirp may not work if power is removed and then restored.
"This could lead consumers to believe it is still working, which poses a risk to consumers not being alerted to a fire or carbon monoxide incident in their home," said the Health Canada recall notice. 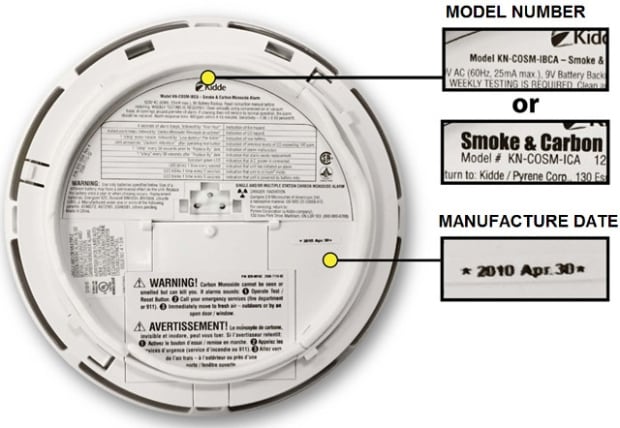 The model and manufacturing information of the recalled smoke detector and carbon monoxide alarms is located on the backs of the devices. (Health Canada)
In Canada, there haven't been any reported incidents, according to Health Canada, but there have been eight in the U.S., where 3.6 million units of the models have been sold. Health Canada did not detail in its recall notice the nature of those incidents, but said there have been no injuries.
The alarms are white, round and measure about 13 to 15 centimetres in diameter. The word Kidde is both on the front and back of the devices, while the manufacturing date is on the back and can be thought of as being in the three or four o'clock spot of a traditional clock.
People with the recalled alarms should stop using them and can contact Kidde for a free replacement or a discount on a new alarm.
Kidde Canada can be contacted at 1-855-239-0490 between 8:00 a.m. and 5:00 p.m. ET Monday to Friday, or through its website.
Posted by Doug W at 6:58 PM No comments:

Monday February 22, 2016 a bill was introduced proposing to mandate the Licensing of Home Inspectors in Ontario, and to require inspectors carry liability E&O insurance.
Bill 165, the Licensed Home Inspectors Act is can be viewed at this link
http://www.ontla.on.ca/web/bills/bills_detail.do?locale=en&BillID=3733&isCurrent=false&detailPage=bills_detail_the_bill
Currently in Ontario there is no regulation for home inspectors, no requirement certification, no requirement for insurance, no requirement for continuing education. This is an enormous risk for the Home Buyer. This poses a huge financial risk as well the condition of homes could also constitute a safety risk to homeowners
Currently only British Columbia and Alberta already licence their Home Inspectors.
With Bill 165, would make it illegal to perform a home inspection without a license and fines up to $10,000 per day could be imposed. It will be illegal for anyone without a licence to “take or use the designation “Licensed Home Inspector” or the initials “L.H.I.” or a description implying that the person is a “Licensed Home Inspector”. Again fines can be imposed
Licensees would be required to:
The next estimated steps:
Feb 2016 - The first reading had a unanimous approval. There is nothing to suggest that given need to help protect consumers from huge financial disasters the members of the Assembly on both sides of the house will pass the Second and Third readings fairly quickly. March/April 2016 - The Bill may require 1 or 2 committee hearings and then be signed into legislation May/June 2016 - Expect the Minister of Government and Consumer Services (Hon David Orazietti MPP) to draw together the foundation for how a Designated Administrative Authority or DAA could be established. It is not known at this stage if a new DAA would be created or if an existing one would be tasked with taking on the Home Inspectors. Following that, the DAA would then have a number of items to create, for the regulation. Much of what they need is already in the Home Inspector Panel Report and Recommendations document
Based on past DAA formations in Ontario, the whole process to establish the initial announcement for regulation to be in the timeframe to fit BEFORE the house rises for the summer
Following that it is again estimated at 12-18 months to finalise the regulations, complete the transition process for which Home Inspectors will be required to meet licensing requirements and reach a point where licensing will be enforced

Recall of Pellet Stove  (Feb 2016) : If you have an England's Stove Works Pellet Stove then please view this recall information regarding smoke build up and possible damage to the glass in the door to request a Free repair kit

http://www.cpsc.gov/en/Recalls/2016/Englands-Stove-Works-Recalls-to-Repair-Freestanding-Pellet-Stoves/
Posted by Doug W at 1:02 PM No comments:

Inspecting older homes 1960's/70's vintage can sometimes expose problems with the wiring that maybe isn't the problem that you perceive it to be.
Wiring that looks like Aluminum wiring may not in fact be Aluminum. Care to try and see the ends of the exposed wires where they have been cut should be taken. This will confirm or contradict the fact that the wiring may be Aluminum. If signs of Copper colour at the cut surface will indicate that the wiring is "Tinned". The surface of the wire was covered with Tin during manufacturing, this was done for 2 purposes. 1 to reduce the interaction between the rubberised wire shielding and the copper wires as corrosion was a concern. 2 to give a better joint where a soldered joint was employed as this was a popular method of creating a secure effective connection.
If fact tinned wires were manufactured as early as 1915 so predating the popularity of Aluminum that was caused in the cost of copper spiking in the 60/70's so be careful not to flag Aluminum wiring and causing the stigma that has been felt by the Aluminum wiring being associated to your home.
The problem that may be existing with this type of wiring specifically is that during its lifetime the rubber shielding may have become brittle and become detached from the wire which then may become exposed. This is why a plasticised more durable shield was developed as is installed on modern wiring.
Aluminum wiring can very effectively and safely used in homes assuming the compatible fixtures, anti corrosion compound and components are used along with it or if "Pigtailing"is employed - Contact us for an inspection and / or advice on this issue.
Posted by Doug W at 7:05 AM No comments:

Radon - Can I get a subsidy for remediation?

A Tax Credit for Radon Remediation: Logical Next Step for Feds


Posted by Kathleen Cooper, Senior Researcher and Paralegal on January 18, 2016
Faced with a seemingly infinite number of environmental health issues to work on at CELA, we make choices. Guided by population health approaches, we focus attention on issues where the stakes are high and large numbers of people are affected. Radon qualifies
There is no debate that radon causes cancer. It kills about 3300 Canadians a year and that’s a lot. Compared to other indoor pollutants, and using cancer risk lingo, the “lifetime excess cancer risk” from radon is orders of magnitude greater

Whether or not you’ve seen the Public Service or TV ads from the Holmes father/son team, a summary:
The federal government, especially Health Canada, has not generally dazzled anyone in recent years with action on environmental health threats. But for radon, they have done a great job. The list is long including valuable research and testing programs, updating the National Building Code, creating a Canadian certification program for radon mitigation professionals, and continuing to run extensive public outreach on the need to test
A quibble is leaving the Canadian radon guideline at 200 Bq/m3 (bequerels per cubic metre, a measure of the number of radioactive disintegrations per second). We agree with the David Suzuki Foundation, and others, that this number is based on out-of-date science and is double the 100 Bq/m3 level recommended by the World Health Organization
Nevertheless, the feds should be commended. They have tested over 19,000 federal buildings and about 18,000 residences across Canada and concluded that about 7% of homes in Canada (about 600,000 dwellings) have radon levels above the Canadian guideline
Some areas are known to be more of a problem. Up to 50% of homes have high radon levels in parts of Manitoba, New Brunswick, Saskatchewan, and Yukon. But, radon occurs in all homes at some level and every home should be tested.
In our work in the Green Budget Coalition, CELA is again calling on the federal government to provide Canadians with a tax credit to help offset radon mitigation costs. Mitigation involves diverting radon away from a foundation and can run between $500 and $3000 per house. This tax measure would be revenue neutral as it would be offset by increased tax revenues from businesses conducting radon remediation
A tax credit is especially necessary for existing homes. Recent and ongoing changes to provincial Building Codes have resulted, for the most part, in radon protection measures. Given the seriousness of this issue, our recent Radon Policy Challenge to provincial and territorial leaders seeks a comprehensive, health-focused approach to legislative reforms at the provincial level where most jurisdiction rests relevant to radon
For most of us, radon testing is a key first step. But, public uptake of Health Canada’s message about the need to test has been limited. It seems to be human nature to more easily avoid action on something you can’t see/smell/taste, and when you know action might cost money. A federal tax credit would send a strong signal to Canadians to take this issue more seriously and help them pay for it, should remediation be needed. Hopefully the feds will take this logical next step in their radon work and create tax relief for homeowners
And, being early in the year, it is not too late for you to test. Since for most Canadians doors and windows will likely still be closed up for another three months, order a test kit today. Find out more at Take Action on Radon

Post Script: If your home is a recent build and still within Tarion Warranty then the initial costs of testing will be for your expense but the remediation fees may be covered by Tarion due to the clause regarding air quality being acceptable or otherwise
Posted by Doug W at 11:30 AM No comments: